“There’s a lot of interest in the housing market and how a changing economy affects one’s position within it.”

With kids back in school and the weather beginning to cool, the housing market begins its annual cooldown as well. With buyer and seller activity remaining strong, it will be at a little more relaxed pace than during the late spring and summer. While Halloween decorations may be adorning stores and soon adorn the stoops of homes around the country, the real estate market this fall is looking far from scary.

In the Twin Cities region, for the week ending September 14:

With two-thirds of the year in the books, we’re getting a clearer picture of where the housing market stands. The latest numbers for Twin Cities residential real estate show stability along with signs of deceleration. The median sales price continued to rise, landing at $286,800 for the month. Pending sales—a measure of signed contracts and future demand—rose 3.2 percent but are down slightly for the year so far. New listings slipped 2.0 percent, thwarting some buyers’ hopes of taking advantage of historically low rates. Closed sales were down 0.9 percent for the month and are down 1.4 percent for the year. One sign of market shift is days on market, which rose 2.5 percent year-over-year. Market times remain swift, but that’s the fourth year-over-year increase this year. Another sign of a changing market is the ratio of sold to list price. Sellers have been accepting a slightly lower share of their list price compared to the year prior for seven of the last eight months. This, along with other indicators, suggests the market is rebalancing. The landscape seems to be improving for buyers, even though sellers still have strong pricing power, favorable negotiating leverage and quick market times.

The number of active listings for sale has been rising this year. Even so, the market remains tight—particularly for first-time buyers and downsizers competing in the sub-$300,000 segment where multiple offers and homes selling for over list price are commonplace. With just 2.5 months of supply, the Twin Cities is still significantly undersupplied. The move-up and upper-bracket segments are less competitive and better supplied. Given some of the recent economic uncertainty, it’s worth noting that the Twin Cities market is well-positioned to withstand an economic downturn.

August 2019 by the Numbers (compared to a year ago)

Sellers listed 7,678 properties on the market, a 2.0 percent decrease from last August
Buyers closed on 6,646 homes, a 0.9 percent decrease
Inventory levels decreased 5.5 percent from last August to 12,238 units
Months Supply of Inventory was down 3.8 percent to 2.5 months
The Median Sales Price rose 7.0 percent to $286,800, a record high for August
Cumulative Days on Market rose 2.5 percent to 41 days, on average (median of 21)
Changes in Sales activity varied by market segment 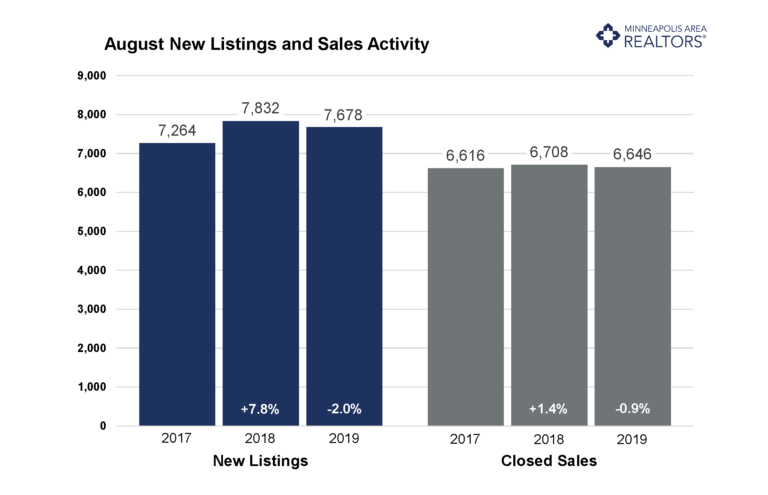 “Some think the fall market isn’t for them, but tight conditions and favorable rates suggest momentum moving into 2020,” said Todd Urbanski, President of Minneapolis Area REALTORS®. “We’re at a moment when sellers are enjoying their position while buyers are taking advantage of lower than expected interest rates and more options.”

“Most markets remain stable across the metro,” said Linda Rogers, President-Elect of Minneapolis Area REALTORS®. “While there is a good amount of local variation, we just don’t see that many signs for concern.”
From The Skinny Blog.

The White House has released a plan to broadly overhaul the housing finance system, including the re-privatization of Fannie Mae and Freddie Mac and reforms to federal agencies involved with financing substantial portions of the mortgages made every year. These changes will affect the cost and availability of loans in the future. Many recommendations will require legislative approval, so it is unclear at this time how much of the plan may eventually be implemented and its ultimate impact on the housing market.

In the Twin Cities region, for the week ending September 7:

Recent mortgage rate declines may provide a small tailwind as we enter the fall housing market, giving buyers a bit more buying power and a little more incentive to lock in a home purchase. However, stock market volatility and concern of a wider economic slowdown in the coming year may temper some buyer enthusiasm. But as rents continue to rise, the value proposition of owning a home remains a compelling option and a goal of most Americans.

In the Twin Cities region, for the week ending August 31:

Lack of affordable inventory has been a key story in real estate in the last few years. There is a growing consensus suggesting the U.S. economy could be entering a recession, and some wonder whether this could lead to an adjustment in housing prices. However, this scenario is unlikely to make housing more affordable, as economic uncertainty is likely to discourage first-time home buyers and could make construction companies leary of building new homes.

In the Twin Cities region, for the week ending August 24:

As families across the U.S. enjoy the last few weeks of summer before the start of the school year, it seems that the real estate market is seeing an infusion of new energy that is partially offsetting the expected seasonal slowdown. Further decreases in housing inventory and month’s supply at the national level point to a moderate influx of new buyers, perhaps due to the allure of lower mortgage rates. It remains to be seen whether these trends will be affected by events in the general economy.

In the Twin Cities region, for the week ending August 17:

The current economic expansion recently became the longest on record, but it’s showing its age. Concerns around slowing growth have spiked amidst new economic data and gyrations in equity markets, but it’s also created opportunities for home buyers. The upside is that mortgage rates have fallen yet again as investors flock to the safety of longer-term U.S. government bonds, thereby driving down the 10-year treasury yield and the 30-year mortgage rates that follow it. That means markets expect monetary easing and lower interest rates to spur growth in the short-term. The risk of recession has grown, but the economy is still buzzing along at a decent pace. Buying a home is an emotional decision, and buyers sometimes pull back at any whiff of turbulence out of fear of hardship.

Twin Cities home buyers and sellers, however, did not pull back in July. Sales rose 4.5 percent and sellers even listed almost 2.0 percent more product than last July. Despite lower interest rates and modest inventory gains as tailwinds, the persistent shortage of homes on the market and affordability headwinds remain. Price increases and wage gains are more aligned now than in the past, but investors are still competing with millennial first-time buyers in the already competitive under $300,000 segment. Conversely, there’s some evidence of a slow-down in the luxury segment. Metrics to watch aside from sales and prices include market times, the ratio of sold to list price and months of supply. These three indicators could be hinting at potential market shifts ahead. That said, home price declines are unlikely until absorption rates rise above 6 months. We’re currently at 2.4 months. “There are lots of headlines out there vying for our attention,” said Todd Urbanski, President of Minneapolis Area REALTORS®. “The bottom line is that the best time to buy a home is when you’re ready. Over 70.0 percent of Minnesotans have made that choice, the vast majority of whom have seen their values increase.”

“No one thought mortgage rates would touch 3.6 percent again,” said Linda Rogers, President-Elect of Minneapolis Area REALTORS®. “Buyers who felt squeezed by a monthly mortgage payment should take another look and consider this a fleeting gift.”
From The Skinny Blog.

As July data roll in, more economists wonder whether we are seeing the signs of an economic slowdown. Yet that would not necessarily imply a slowdown in the housing market. While July’s existing home sales fell below analyst expectations, consumer confidence in housing reached new highs as mortgage rates dropped and more homeowners refinanced their homes. It remains to be seen whether growing confidence and lower rates will help boost home sales.

In the Twin Cities region, for the week ending August 10: