Strong buyer activity continues into the back-to-school season that normally signals the seasonal slowing of the housing market. With more buyers in the market and the continued constrained supply of homes for sale, speedy sales and multiple offers are likely to remain a common occurrence and will keep agents and prospective homebuyers and sellers quite busy this fall.

In the Twin Cities region, for the week ending September 5:

Mortgage rates continue to remain near all-time lows. This week, mortgage giant Freddie Mac reported that average rates on a 30-year fixed-rate mortgage were 2.91% with an average of .8 points, just slightly above the record-low rate of 2.88% recorded earlier in the month. The Federal Reserve has announced that they will be adopting a more flexible monetary policy in an effort to achieve inflation that averages 2% over time, which is likely to keep mortgage rates low and provide further support to economic activity for an extended period of time.

In the Twin Cities region, for the week ending August 29:

New construction activity continues to show strength, reaching pre-COVID-19 levels. The latest report from the Commerce Department and U.S. Housing and Urban Development shows total housing production is up 22.6% to a seasonally adjusted annual rate of nearly 1.5 million units, the highest rate since February. Lumber prices have surged more than 110% since mid-April, adding approximately $14,000 to the typical new single-family home according to National Association of Home Builder estimates. Many are finding new construction home prices have increased in recent months from the pressures of increased costs to builders and strong consumer demand.

In the Twin Cities region, for the week ending August 22:

With the inventory of homes for sale still constrained, a competitive market for buyers shows little sign of waning.

Weekly new unemployment insurance claims dropped below one million for the first time since March last week. More than 28 million people are receiving some form of unemployment benefits as of July 25th, which was down more than 3 million from the previous week. Economists are concerned that many of those laid off since the start of COVID-19 may lose their jobs permanently, as some businesses, both large and small, have downsized or closed in recent months. Replacing those lost jobs is likely to be a lengthy process.

In the Twin Cities region, for the week ending August 15:

New listings up, price growth accelerates, but some activity from Q2 was postponed into July

(August 20, 2020) – According to new data from the Minneapolis Area REALTORS® and the Saint Paul Area Association of REALTORS®, buyer and seller activity in the 16-county Twin Cities metro both increased from 2019.

After double-digit declines in April and May, the number of signed purchase agreements rose 7.5 percent in June and another 10.3 percent in July, both compared to last July. At 6,866, July 2020 saw the highest pending sales figure since at least 2003, and likely longer. However, some of the pent-up demand from April and May was shifted into June and July, meaning sellers accepted about as many offers this July as they typically have in May of each of the prior four years. Nevertheless, the gain has turned even year-to-date pending sales positive—now up 1.3 percent compared to 2019.

“With interest rates at record lows, in some cases below 3.0 percent, we are experiencing strong demand from buyers to lock in their purchases,” said Patrick Ruble, president of the Saint Paul Area Association of REALTORS®. “If not for the pandemic, some of these accepted offers in July that set new records might have taken place in May or June.”

Although new listings increased 0.8 percent from last July, sellers struggled to keep up with all the demand. Those that did sell received, on average, 100.1 percent of their original asking price—the 2nd highest figure on record since 2003 after June 2018. Price growth also accelerated; the median price jumped 10.4 percent to $312,500. Record-low interest rates can partly offset declines in affordability spurred by rising prices. 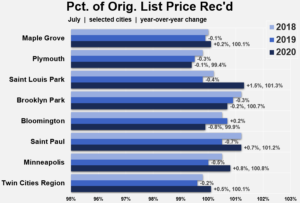 “July was an undeniably strong month, particularly in light of some of the headwinds,” according to Linda Rogers, President of Minneapolis Area REALTORS®. “Most areas saw sales growth and other improvements, including both large core cities, where buyers continued to outbid each other.”

Minneapolis sellers received offers that were on average 100.8 percent of their list price. In other words, sellers got more than their list price. In St. Louis Park, St. Paul and Brooklyn Park the figures were 101.3, 101.2 and 100.7 percent respectively. Both buyer and seller activity were up double-digits in both Minneapolis and St. Paul.

Some buyers are opting for newer, farther-out suburban subdivisions that are car-dependent and still growing but come with the latest technology and more space for tele-commuting. An uptick in condo listings can anecdotally be attributed more to health concerns and a temporary closure of businesses and limited activities than any recent unrest. More time is needed to evaluate this.

July 2020 by the numbers compared to a year ago

As the major stock market indexes continue to be at or near record highs, we find the housing market in high demand as well. Mortgage rates are still at or near record lows and home buyer activity remains strong. While uncertainty remains on what effects the upcoming elections and any seasonal resurgence of COVID-19 may have on the financial and housing market, healthy housing demand fundamentals today will create significant tailwinds in the near term.

In the Twin Cities region, for the week ending August 8:

While the Bureau of Economic Analysis reported this week that the US economy contracted at a 32.9% annual rate in Q2 2020, the housing market continues to show strength. Freddie Mac reported 30-year fixed-rate mortgages are hovering around 3% with .8 points, which is three-quarters of a percent lower than this time last year. With showing activity and pending sales still posting strong numbers, the housing market looks to continue to be a bright spot in economic activity.

In the Twin Cities region, for the week ending August 1:

The Mortgage Bankers Association reported that their Purchase Index of mortgage applications was 19 percent higher than the same week one year ago. Continued high levels of home purchase mortgage applications suggests that home buyer interest and activity will remain strong in the coming weeks.

In the Twin Cities region, for the week ending July 25:

The latest figures released by the Department of Commerce show total housing starts in June rose 17.3% to a seasonally adjusted annual rate of 1.19 million units, with single-family units leading the way with a 17.2% increase to a seasonally adjusted rate of 831,000 per year. With demand for housing strong across most of the nation, this increase in new construction is welcome, but will do little to significantly impact the lack of housing inventory nationwide.

In the Twin Cities region, for the week ending July 18: