(May 16, 2022) – According to new data from Minneapolis Area REALTORS® and the Saint Paul Area Association of REALTORS®, the Twin Cities metro area saw rising prices, fast market times and strong offers—often over asking price—during April. But rising mortgage rates have forced the affordability index below 100 for the first time since at least 2004.

While the median home price rose 10.0 percent to reach a new record of $370,000—and will likely do so again over the next couple months—declines in affordability have continued to weigh on some buyers who are already fatigued from writing several offers. Historically low interest rates have been offsetting the effect of rising prices on monthly mortgage payments. But that’s quickly changing as the Federal Reserve races to combat high inflation by raising rates. Even so, the long-term average 30-year fixed mortgage rate is about 8.0 percent, above where we currently stand at around 5.2 percent. The affordability index fell to 95, meaning the median income was 95.0 percent of the necessary income needed to qualify for the median priced home under prevailing interest rates.

Despite affordability concerns, the supply-demand imbalance will likely keep prices firm. Some buyers may need to re-evaluate their target price to keep monthly payments at a level they’re comfortable with. We ended April with 5,758 homes on the market, 9.2 percent fewer than April 2021 and the twenty-fifth straight month of year-over-year inventory declines. This amounts to just 1.1 months’ supply of inventory, giving sellers the upper hand (a balanced market has four to six months’ supply). “Even with several justifiable concerns, this market continues to outperform,” according to Mark Mason, President of the Saint Paul Area Association of REALTORS®.

Due to several factors, buyer activity has moderated somewhat. First, we’re comparing against the highs of the Covid housing craze from last spring. Second, inventory is even lower and further pressuring sales. Third, rising rates have likely taken some buyers out of the market. Buyers signed 9.2 percent fewer purchase agreements than April of last year and closed on 9.0 percent fewer homes. Sellers listed 7.0 percent fewer homes than last April. Sellers may feel attached to their interest rate and reluctant to list their homes to avoid higher interest rates.

While still high, it’s possible inflation has peaked. Financial experts report that annual inflation moderated for the first time in months. “It’s the rates and payment piece that is of concern to many of the buyers I work with,” said Denise Mazone, President of Minneapolis Area REALTORS®. “The reality is that people will need to buy and sell homes in any environment, but this really puts pressure on those who are on a budget.” Listings spent 9.7 percent fewer days on market than April 2021 on average. But the median days on market showed half of all homes went under contract in under 8 days, which is even with last April’s pace. This could be a sign of stabilization, yet sellers accepted offers 3.8 percent higher than their list price, on average.

APRIL 2022 BY THE NUMBERS (COMPARED TO A YEAR AGO) 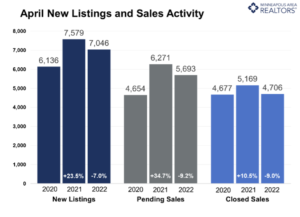